The World of the Bootlegger

Most of the bootleggers from the Philadelphia Delaware Valley were born around the turn of the twentieth century to immigrant parents, primarily of Eastern European Jewish extraction, but also of Italian, Polish, or Irish origin. They were largely uneducated and unskilled. Their education came on the streets, where they engaged in rough-and-tumble vocations as youths before carving a niche in the perilous, but potentially lucrative, illegal alcohol rackets. Many also had interests in gambling, and to a lesser extent, drug distribution and prostitution ventures. Many had histories of committing increasingly violent crimes, while others had pretensions to establishing careers as respectable businessmen. In the Philadelphia area, in particular, there were close ties between the worlds of prize fighting and bootlegging.

Bootleggers often spent their money as quickly as they made it. They were fixtures at important sporting events, the theater, the race track, and gambling houses throughout the country. Nevertheless, the most successful bootleggers usually channeled money into legal investments. Most of the prominent bootleggers were plagued by tax evasion charges, and many were pursued by the government for unpaid taxes well after prohibition ended.

Violence was a fact of life in bootlegging. In the Philadelphia Delaware Valley area, waves of racketeer murders were particularly prominent in 1922, 1925, 1928, 1930, and 1932, and continued well beyond Prohibition. The violence obscures a remarkable facet of bootlegging operations: cooperation among racketeers, retailers, and authorities. Investigations uncovered a complex network of police graft and official protection of racketeers' manufacturing, warehousing, distribution, and retailing interests. The use of violence to settle disputes was actually secondary to that of monetary negotiations, both legal and illegal. The unskilled youths from humble backgrounds developed no small level of business acumen to accompany their street savvy. Perhaps that is why bootleggers continued to dominate the rackets after prohibition ended, moving into numbers and casino gambling, untaxed liquor, union racketeering, and other illegal enterprises, as well as the legal liquor distilling business. 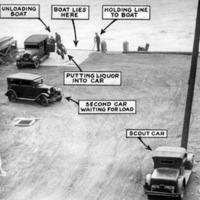 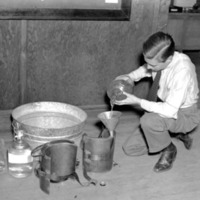 Prohibition agent demonstrates how to fill an illegal "booze vest." 1930 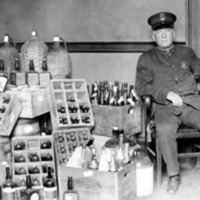 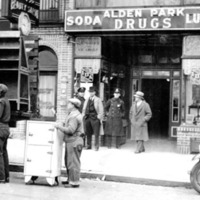 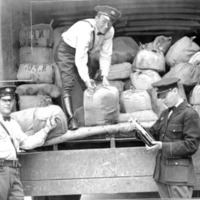